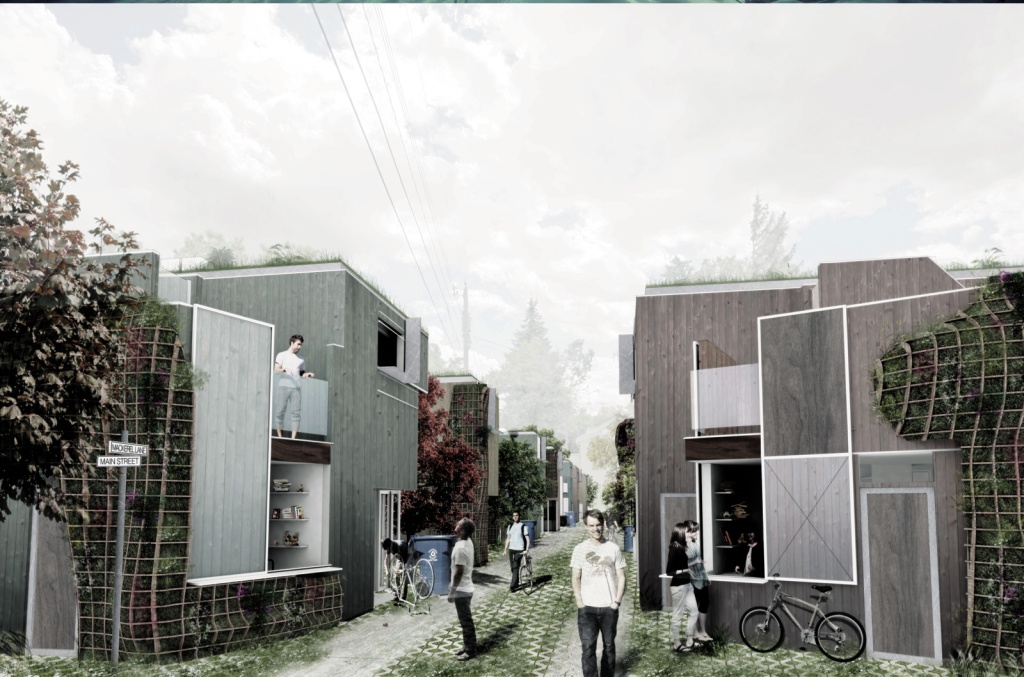 Behind the facade of Calgary’s inner-city neighbourhoods is a largely dusty area of garbage cans, bottle pickers and garages. It’s the perfect place to build a home.

While there’s been a lot of rhetoric as of late around suburban versus urban growth, there’s a wealth of unused land in Calgary. In other cities that same land is being gobbled it up in the name of higher density while still maintaining the character of their neighbourhoods. You may initially scoff at the idea, but living in an alley is more appealing than you think.

Matthew Kennedy has spent a lot of time thinking about alleys and community, specifically in Calgary. He wrote his masters of architecture thesis on the subject and is keen on pursuing the idea in the real world through his work at Studio North, along with partner Mark Erickson.

“The idea is not transforming the urban fabric of the community,” says Kennedy. “The empty nester could potentially build a laneway house or have a secondary suite that they could rent out to university students or a young professional, where the urban fabric is maintained but there’s just a new layer added on top of it, a new social intricacy that wasn’t there before. It’s just adding a richness to a community as opposed to just bowling it over and putting up a new condo.”

“Maybe it doesn’t make it easier for a family that makes $35,000 a year, but what I think it will do is free up the rental market where people who make more money, who can afford $1,200 a month in rent, can live in a laneway house,” says Kennedy in reference to Calgary’s dismal rental situation and rising costs.

Of course, this isn’t a new concept — laneway housing has existed for a long time in many cities around the world. In our densest neighbour, Vancouver, it’s an increasingly popular planning option. Since 2009, that city has seen over 800 permits issued for laneway housing in single-family neighbourhoods, with 500 already built.

In Calgary, where there’s a palpable fear of rental properties in many communities, and where the words “secondary suite” send some screaming for cover, this concept hasn’t really taken off and certainly faces a battle from NIMBY neighbours.

“I think a really provocative way to think of zoning would be to allow people to subdivide — you see it a lot in Ramsay where lots are subdivided front to back,” says Kennedy. “Think if everyone is able to subdivide their house between front and back, all of a sudden everyone has, like, $200,000 potentially. They could sell for someone to develop a small laneway house. For a working professional, building a small dwelling on a small piece of land puts you in the same market as a condo, but then you have your own house.”

It’s the reliance on relaxed zoning regulations, rather than drawing up a master plan, that most appeals to the Studio North partners. Though they have designed concepts for what laneways could look like, including tree canopies and informal courtyards between houses, their ideas tend to the anarchic rather than the prescriptive.

“It would be homeowners and architects and different builders, with all these little cottages in the backyard,” says Kennedy of his vision for Calgary’s alleys. “The thing that was really great about Kyoto [when I was there researching] is there wasn’t a defined street edge, it was really rough where there’s all these little pockets where plants would be growing, bikes would be parked and people would be sitting in the shade. It was that roughness along the edge that really kind of animated that area and created a kind of framework… that people could fill in themselves.”

For both Kennedy and Erickson, great cities develop in a piecemeal fashion, adding layers and mixing demographics to create a more interesting whole.

What also appeals to them about the concept is the need for smart design, not only of the dwelling proper, but also it’s more confined interior — space at a premium is space that needs to be well thought out.

“In terms of design, it’s very interesting for us because it forces us to really be smart with space and make space that’s very versatile and that can transform,” says Erickson. “Space, you can design it so it’s massive. In a suburban home, because there’s so much space, it’s often misused.”

“Or not used at all,” adds Kennedy.