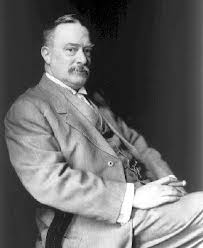 We are not impressed.

On November 14, Lord Conrad Black will descend in all his majesty, sneering down from his imagined social perch to be recognized as this year’s winner of the annual Bob Edwards Award.

A bit of history. Bob Edwards was a hard-drinking, rabble-rousing gonzo journalist who ran theCalgary Eye Opener in the early 1900s of whom we are a big fan. It was a half-crazed rag, full of satire and make believe, and honest to god writing on the ails of society. He skewered the ruling classes, he never pulled a punch, he teased, tormented and cajoled everyone and everything that deserved it. He disdained arrogance and high education. He was, in short, the opposite of Lord Black.

And now, after honouring the likes of Gwynne Dyer, Rick Mercer, John Ralston Saul, Pierre Berton and many more since it started in 1974, the organizers of the award have decided to toast a man who’s likely responsible, more than any one individual, for helping to chisel away at good journalism and a good standard of living for journalists in Canada. A man so obsessed with privilege and title that he only pledges allegiance to a country when it’s in his best interests. A man who was sent to prison for fraud and obstruction of justice. In short, a man who would have been squarely in Bob’s crosshairs.

Had Lord Black been around during the days of the Eye Opener , he likely would have bought the damn thing in order to shut it down, or tried to sue it out of existence. He would have grumbled about status and class and libel and all kinds of words that would have pierced Bob’s spirit.

On November 14, help yourself to a healthy pour of whisky and drink it down in memory of a man who will surely be squirming and shaking in Union Cemetery.