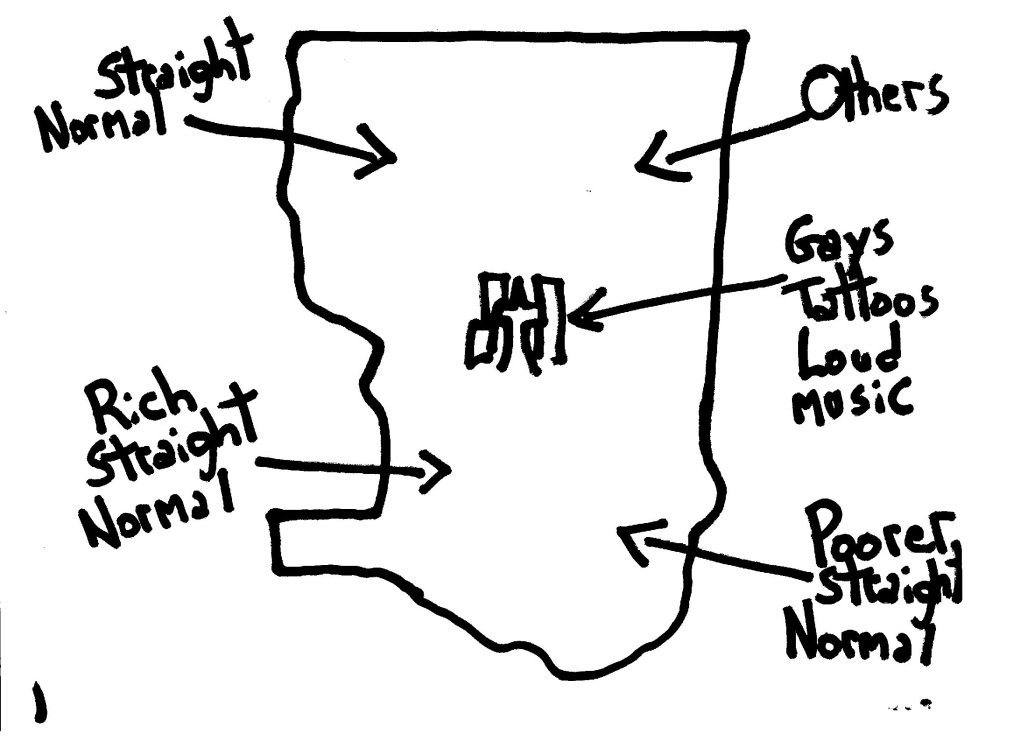 You know what’s uncomfortable? Living next to tattooed lesbians, or gays or just straight dudes with tattoos. Especially if they shop at Safeway alongside more respectable members of suburban society. I mean, yes, you have to come across them from time to time when you work downtown, but these people should really stay down there (haha) and leave the suburbs to us straight, white folks. Or the northeast to other people. It’s just the way things should be.

Thankfully the Urban Development Institute, a collection of Calgary developers headed by former Calgary Herald publisher Guy Huntingford, have thoughtfully put this notion of a segregated city to print as the first (and now deleted) post in their Just the Facts campaign.

After correctly pointing out that Calgary is not New York City, this brave document goes on to highlight why it’s not New York City and how great that is. You see, it’s about “comfort capital,” ensuring that those who live in our city never have to step out of their comfort zone and associate with “others.”

Let’s let the UDI do the talking:

“It’s not a subject of much discussion, but research suggests residency location choice is strongly linked to how comfortable a person feels in a place where no one is like them. And it doesn’t just apply to visible minorities searching out the diaspora,” reads the document.

“It can be the guy with tattoos, feeling on display every time he shops at the Safeway on the city’s periphery.

“Or the gay couple in a world of heterosexual suburbanites.

“And yes, the person who is a member of a visible minority community.

“It can be even more basic than that – having the hippest nightspots close by isn’t important to the woman who wouldn’t know what to wear anyway. Even if she wanted to go clubbing, which she doesn’t.”

I don’t know how many times I’ve been shopping with my white wife  (who totally doesn’t know what to wear to one of those fancy downtown elite nightclubs) at Safeway, minding our own business when some young guy with tattoos nervously pops up in the produce aisle to grab some apples before quickly snaking away. If we could just figure out which house he’s in, we could probably get a mob together to demand he go back downtown. It’s unnerving for all involved. He’s not happy. We’re certainly not happy. Really, tattoos in the suburbs!? I never.

The folks who ensured that Calgary is dominated by rows upon rows of single vision neighbourhoods have it right on this one. Again, their words:

“But what the research highlights is that people go where they feel comfortable, and diversity of a city – the ‘comfort capital’ index – is a large part of its livability. Shoe-horning everyone into mandated, single-vision neighbourhoods won’t work.”

You can read this brilliant call for a segregated city below because nothing really disappears on the Internet. I, for one, would like to salute them for their brave stance, ignoring any notion that sexism, racism, homophobia or classism is inappropriate in today’s day and age. Cheers to diversity (in its proper place)!

(Oh and that awesome map at the top? That’s mine, not theirs, just in case someone gets all confused and legally.)

UDI has apologized for the post. According to CEO Guy Huntingford, “The article used examples in a good-will effort to illustrate how some Calgarians might view themselves within the context of their neighbourhoods.”